August 19, 2010
Sentuhan Bayu:
After reading this article, only then I realized yeah! Modern Cloth diapering has indeed helped & made for lazy people. For example, I don't have to monitor disposables stocks at home like i used to & monitor the price in the stores (ieTesco, Giant, Speed99, carrefour have different prices). Mind you, as a mother I have to remember which stores are having the best price before went off to buy those sposies.  And I don't have to walk down 5 floors & 20 meters to throw garbage daily. Well I live in a small apartment, so soiled sposies smell does smell. Or maybe my nose just a little too sensitive. With cloth diapering, I just need to throw garbage once in 3 days. Hahahah talking about convenient. But I have to agree to this writer, the only thing I hate is to stuffing it. Well even so, it is not a big problem. Outsource that activity to your loving husband, yeah!

Posted by Christie Haskell on August 16, 2010 at 3:15 PM
I've always known the typically touted benefits of cloth diapers -- they're reusable, better for the planet, no chemicals on baby's skin ....
But then there is the act of actually using them.
I shied away from cloth diapers for quite awhile. I tried briefly with my son and hated them. I didn't intend to use them with my daughter until she proved to have incredibly sensitive skin like her daddy, and I realized we'd spent $250 in just diapers by the time she was 2 1/2 months old. My inner penny-pincher winced and decided I had to bite the bullet and switch to cloth.
Ugh, but the laundry! There's always way too many dirty cloth
es and I'm so thankful that I can close my laundry room door ... even if it's just barely. Then the issue of dealing with cleaning poop? Out of a diaper?! Not appealing. And don't get me started on cleaning poo out of a diaper and putting it in the toilet and the diaper in the trash. I've been guilty of throwing poo right in the garbage.
But the money I was spending! Plus, my daughter's skin was just way too sensitive and was red and rashy all the time, so, I finally bought the Sweet Bundle ($99) from gDiapers.com and four additional Little gPants ($16.99-$18.99) in various colors. I got disposable inserts as well as some cloth. One of my favorite things about gDiapers is they're considered a Hybrid diaper, meaning I can use earth-friendly, biodegradable, flushable inserts when I'm out, and cloth at home.

While I prepped the cloth (you have to wash and dry a few times to make it more absorbent), I was looking at my simple and familiar disposable diapers longingly. There was no going back now, not with how much money I'd spent (which was about the same as I would have spent on four months of disposables -- except I've been using these diapers for a year now).
Now, I think it's easier than disposables. I never freak out over not having enough diapers or the money for more. If I'm running low, all I have to do is throw the diapers in the washer and in two hours, I've got 20 diapers again.
Exclusively breastfed baby poop is totally water-soluble, so if you BF, the first six months are super-easy since you don't have to deal with the poop at all other than wiping it off the baby's butt. If you use cloth wipes, which can be as simple as wet washcloths, it's no different than disposables except you wash them.

Once they eat solids, they go through a gross period where you do need to clean the poop off -- I'm lazy and just wipe the cloth off with a disposable wipe, which I drop in the trash (poo in the trash -- again -- sue me). When poop is a little more solid, it literally just falls off the insert. It can't get much easier than that. Then I toss the diaper in my homemade, adorable waterproof bag and pull the drawstring, where they sit until I wash them every couple of days.If that sounds like too much work, hire a diaper service! The best of both worlds -- you have diapers delivered to your door, but other people wash them and hand you clean ones. Crafty friends of mine sew their own diapers -- talk about saving money!
Now I've been doing this for over a year and can't imagine going back to disposables. I used some for a recent plane trip and was grossed out by their crinkly feel, their smell when wet, and the nasty squishiness -- even though I used to roll my eyes at women who said the exact same things. We've saved so much money and between this, nursing, and not feeding baby food, I never set foot in the baby aisle! I never worry about my Navy husband having overnight duty, and me being stuck at home with no car and no diapers. Plus, cloth diapers are so much cuter than disposables -- even the designer ones. Sorry, but they just are!
Do you think cloth diapers are easy? Have you or would you try them? 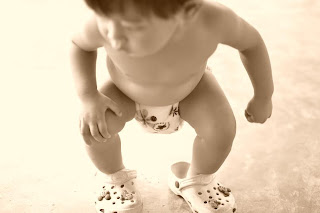