Have you watched Alice in Wonderland?

This isn't Lewis Carroll's Alice's Adventures in Wonderland. Nor is it the sequel, Through the Looking Glass.

Instead, it's kind of a weird mash-up of concepts from both (down to the deck-of-cards and chessboard motifs) that sets itself up as something of a sequel to the original. 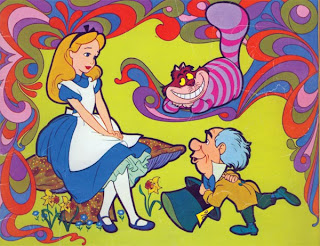 In Tim Burton's reimagining, an almost-20-year-old girl named Alice (Wasikowska), running away from a suitor, falls down a rabbit hole and ends up in the bizarre Wonderland. But is she the correct Alice that the oppressed denizens have been waiting for ?
Visually, Tim Burton's AiW is stunning. As for the amusing and delightful bits, they are provided mostly by Helena Bonham Carter's giant-domed Red Queen, who is quite simply a hoot. (I love her character so much)
It's also fun playing spot-the-star for the vocal performances – all those CGI-executed anthropomorphic animals need familiar human tones, you know.

I'm quite disappointed with Depp's unappealing performance as the Mad Hatter, but a lot of this can be attributed to the indifferent, eccentric way the character is written; and the film's leaden pacing and uninvolved storytelling which left me in a state akin to "meeting fatigue".

You know – that curious place you get to after back-to-back meetings, between wakefulness and sleep, where your eyes are open but your mind keeps blinking in and out of consciousness.

AiW's biggest problem is that it wants to make a departure from the source material but is too hesitant to spread its wings and take flight. Burton should have just made a movie adaptation of the videogame American McGee's Alice.

What's really wasted is the opportunity for all the funny word play and "literary nonsense" that Lewis Carroll was noted for. As the character positioned as the main draw of this movie, the Mad Hatter would have been the perfect vehicle to deliver this kind of stuff.

All he does is stick out like a sore thumb (though "eyesore" may be more appropriate, given his garish makeover) and look very uncomfortable – though whether it's from the Red Queen's oppression or the creeping realisation that this is a turkey of a role, is not quite clear.

Far better realised are the Red Queen and Cheshire Cat (what is it with big round heads in this movie?). Wasikowska's Alice is suitably befuddled at the start and grows into her role of reluctant saviour quite well, though her journey and "personal growth" really aren't anything new.